Khan will be lodged in Arthur Road jail. The Narcotics Control Bureau (NCB) special counsel, ASG Anil Singh, invoked Mahatma Gandhi and freedom fighters to argue that the drug menace cannot be allowed in the land whose freedom they fought for.

Senior counsel Amit Desai for Aryan Khan countered, saying that as part of the freedom struggle, what was fought for was also liberty, fundamental rights, and the doctrine of the rule of law and the need for compliance with the law and Constitutional principles. “We cannot pick up young children who are at the bottom of the food chain as consumers and put them in jails,” said Desai. The hearing was before a packed courtroom of special NDPS judge V V Patil. 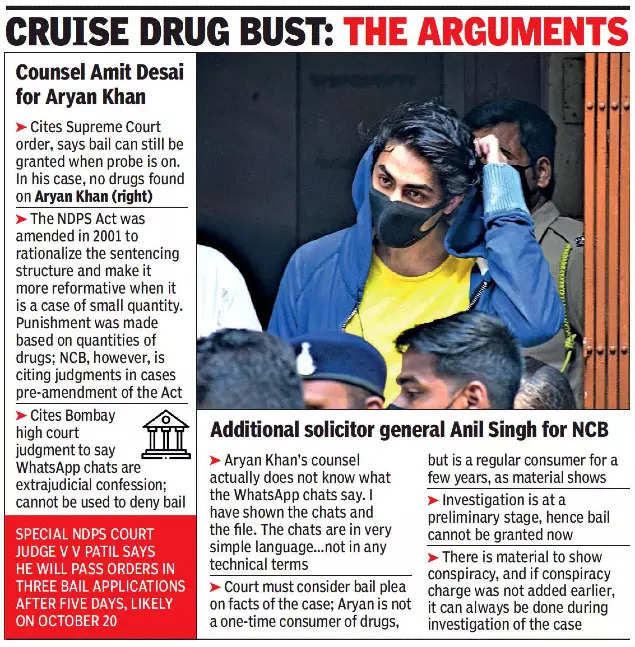 The judge called for the case papers. The court has also reserved the order in two other bail applications– those of Khan’s friend Arbaaz Merchant, 26, and Munmun Dhamecha, 28 a model from Madhya Pradesh.

Singh, who concluded his submissions on Thursday, said the bail plea was misconceived at this stage as investigations are still on and the agency is seeking help of the Ministry of External Affairs to probe Khan’s alleged foreign contact and chats to probe an alleged international connection. He also said that since there is a commercial quantity of drugs recovered from other accused, the fetters on bail would apply under Section 37 of the Narcotics Drug and Psychotropic Substances (NDPS) Act. The section makes it difficult for bail to be granted when an offence involves commercial quantity. The ASG also denied Khan’s submissions of no possession, as he said that since Merchant was found with charas and both admitted to wanting to smoke it, it became his “conscious possession.”

Desai said not only was no drug found on Khan, the alleged statements, both of which have been retracted, at best speak of future consumption of small quantities of charas, a drug legal in many countries for small quantities. Desai added, “Abdul Shaikh was named by another accused who Khan and Merchant have no connection with, and they cannot be dragged into or made part of such conspiracy now when their arrest did not involve any abetment or conspiracy allegation.”

Singh said NCB can invoke Section 29 of the NDPS Act (conspiracy) at any stage during investigation. Desai denied the allegations and said, “It is false to say that he (Khan) is involved in any drug trafficking or drug chain and it is an inherently absurd allegation.”

To Singh’s submission that NCB is a responsible agency and doing its job, Desai said, “I fully agree with Singh about the great work that NCB is doing.” He added, “Not only in India but across the world there is a drug menace that is needed to be tackled. Kudos to the department, they say they even put their lives in danger to protect society, but liberty is of utmost importance too and the reformative doctrine be heeded.”

punjab: Captain Amarinder: ‘Yes, I am forming a party, can go for seat-sharing pact with BJP’ | India News

Ethereum Outperforms Bitcoin, Why ETH Could Rally To New ATH